Freediving and Mental Health: Part 4 of 5

OCD, addiction, depression, anxiety. Huge battles being fought behind closed doors. What would you do if you found a way out? As another close friend of mine says:
We go out freediving to “Drown our Demons”. Some people lean on family, some on religion or a higher power. Others go to therapy. I’ve learned that at the end of the day, we have to depend on ourselves. Nobody else can convince you to change or grow – it’s so difficult that many people just end up ignoring the hard work to become better and remain trapped, at the mercy of their own negative behavioral patterns. I offer my personal story now as another example of how we can use our relationship with water to lift ourselves up for our selves and for our loved ones. 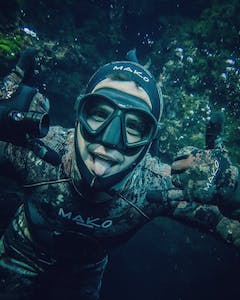 Ever since I can remember, I’ve been odd around the water. Instead of playing volleyball with my cousins, I’d be walking around with a bucket and a net, catching little creatures for observation. When adolescent drama hit, I took my angst to the edge of the ocean, standing on the Puerto Rican beach and staring out over the water for over an hour as the sand climbed up my ankles. I leaned on the ocean for support. It absorbed my thoughts just as well as any good listener I’ve ever met. The best part about it was its permanence. Like a loyal dog, the ocean has always been there for me. Even after I ignored it for years while I pursued my degree in mental health therapy, I’d check back in during a vacation to find the call was just as strong. With a steady insistence it called me back from every career I attempted to pursue. It became
an integral part of who I am.

Three years ago, I wasn’t familiar with the ethos or parlance of those who lived the life of aquatic adventure. I didn’t understand that my “gills” could “dry out”. I was working two dead-end jobs and trying to keep a marriage together that would ultimately fail. I was in the grips of depression. A friend came to the rescue with the idea of freediving a nearby spring. I dug out my old SCUBA mask and fins for some decent snorkeling gear. When I dropped into that spring, I was surprised to find that same feeling I got at the ocean’s edge, but this time in 40 foot deep, crystal-clear freshwater. I realized very quickly that each time I went freediving, I would get a high that would last sometimes for several days. In time, I realized I was finally being true to myself. Serving myself with each dive, and aligning my day to day experience with my desired sense of identity. I finally answered the call – not of the ocean specifically, but of water itself. Since then, there has been no other path for me.